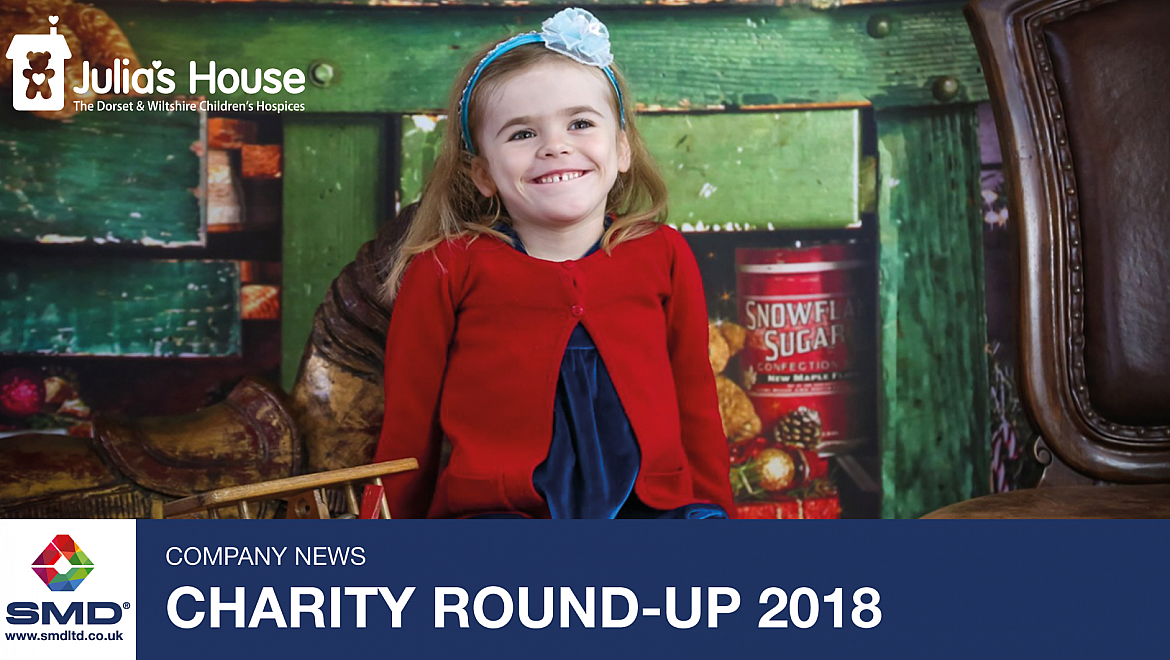 Raising funds for charity can sometimes be a challenge, which is why this year we chose to push our physical limits when it came to our fundraising.

As part of our mission to give back to those in need, we chose to support Dorset-based Julia’s House and took part in quite a few physically demanding activities in order to reach our target.

The great work of Julia’s House.

Although we ended up a little shy of our target with £1307, we’re still so pleased that the money we raised will go towards the fantastic work done by Julia’s House. Providing day and occasional overnight care for children like Carmela (pictured above) with life-limiting or life-threatening conditions in a safe and comforting environment , the hospice is entirely community funded. The centre, which have patrons such as Harry Redknapp and James McVey, means that children can take part in activities tailored to their needs such as play sessions and even sleepovers. These enable them to enjoy the same experiences as any other child and parents can use take this time out for themselves, their family and any other children for a well-deserved break.

But it’s not just the centre itself that’s so important, they also carry out a lot of hospice care in the children’s own homes, as well as organising social activities such as BBQs, parties, shopping trips and even quad biking! We took to the great outdoors by foot, bike and even a mud slide or two to raise money for this hugely worthwhile cause.

What a view – Jurassic Coast Trek.

After an early start to the day the trekkers Thom, Keith, Scott and Matt, set off on their 26-mile hike over steep hills overlooking craggy coastline, the course even took them up through Swanage. Although not billed as a race, a competitive streak took over those involved, and after storming ahead for the half-way point the terrain got the better of them as the hike went on.

When they reached the food station they barely stopped and merely grabbed some supplies before setting off again – of course, there’s always time for an ice cream though! In the latter stages of the trek, fatigue did start to set in and there were sore ankles legs and knees all round. Crossing the line in an impressive 8 hours and 30 minutes, Thom ran to the front of the group to take fourth place overall, closely followed by his team mates who were all very happy to tuck into a hog roast and a pint to top off a very tough day indeed!

On yer bike! The Big Ride.

Despite the scorching summer weather, two of our team, Jim Brokenshire and Pete Watkins, took part in a 50-mile bike ride. Kitted out and covered in sun cream the duo found that gliding through the hills and rolling countryside wasn’t easy, especially when they strayed slightly from the planned route and got slightly lost, adding an extra 5 miles onto their journey. However, it was all worth it in the end and after completing the route in just under 4 hours they were thrilled to be able to have made a difference and contributed to this great cause.

To commemorate 100 year since the Great War, some of the team headed off to Hever Castle, Kent the day before Remembrance Sunday to take part in a 6km Commando assault course. With tough obstacles taken straight from the Commando text book, they were able to have a taste of just a small fraction of the gruelling activities that modern Royal Marines experience during their training.

After a warm-up (which left a few of them tired already), they were literally thrown in at the deep end for a D-Day style lake crossing whilst being briefed on what was to come. From the cramped spaces of the Tunnel Rat section, to the underwater Sheep Dip and the terrifying pitch-black tunnels of the Catacombs of Doom, the SMD team soon learned that it wasn’t for the faint of heart!

Although some of the team were plagued with pre-existing injuries that made it even harder, there was a great sense of achievement all round as they made it over the finish line.

With some great activities planned for the coming year, we can’t wait to share our progress with you…and make sure we smash our annual target!