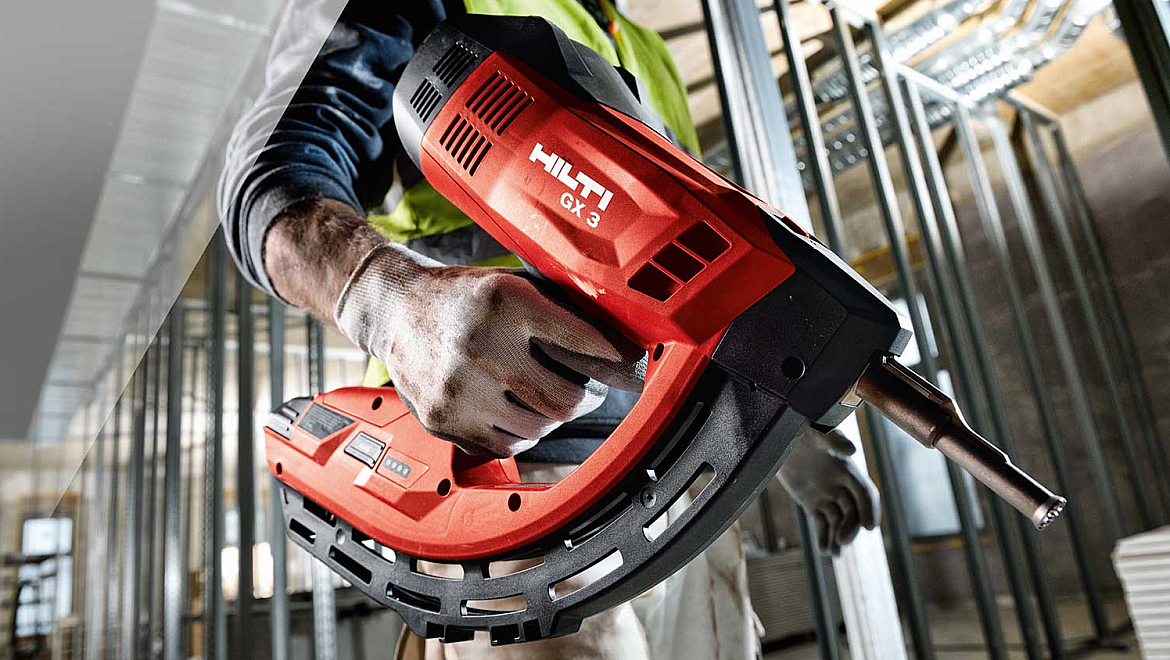 We work closely with Hilti, the multi-national leading-edge technology, software and services provider to the construction industry. This relationship led to our operations manager Richard Brokenshire being invited to the Hilti Innovation Centre in Lichtenstein.

SMD has worked with Hilti for many years and recently assisted the company in proving that its GX fixings were a suitable application for the decking market.

We were then asked to help Hilti develop its new GX 3 tool (a gas-actuated fastening tool for interior finishing applications). Our site operatives used this prototype tool for more than six months, giving constant feedback on the tool and assisting with its development. This tool is now widely available throughout the construction industry.

Because of this close partnership with Hilti we are now classified as one of their VIP customers and as such were invited to attend a three-day experience at their facilities in Liechtenstein and Austria with other clients from the UK, Ireland, Sweden, Finland and Norway – the company’s Northern Europe region.

It was a fantastic experience. We were collected from Zurich Airport and taken  a small village in Austria for a two-night stay. After a guided tour of the historic town we enjoyed a roof top dinner with our counterparts across Europe and the Northern European Hilti team.

The following day at the Hilti Innovation Centre in Schaan, Lichtenstein, we were welcomed by Jorg Kampeyer, a member of Hilti’s global executive board, who talked about the importance that Hilti places on having strong company values as well as its vision for the future.

Andreas Bong, head of corporate research and technology at the innovation centre, explained the importance of innovation and how Hilti strove to be at the cutting edge of technology and development of tools, software and consumables.

During a tour of the innovation centre we saw the research labs where the experts behind the innovations work hard behind the scenes. What a place to work!  The views from the offices were absolutely awe-inspiring.

That afternoon we were given hands-on experience with new cutting edge tooling due to be launched in the next 12 months. It was clear from what was being discussed and shown that Hilti really is at the cutting edge of tech and efficiency for its tools and products – with a focus on maximising operator safety, productivity and quality assurances.

A lot of the new tools have been developed to include cloud-based technologies and are able to produce quality assurance reports seamlessly. I was blown away by how advanced some of this technology is and I can see this becoming an integral part of our business moving forward. We also saw the factory where all shot fixings, mechanical anchor fixings and diamond tipped tooling were produced.

In the evening we were treated to an exclusive tour of the Hilti Art Foundation followed by a gala dinner were we were joined by two members of the Hilti family Michael Hilti and his daughter Michelle Hilti.

Our final day was spent at Plant 4, the factory where they manufacture the parts and assemble some of the Hilti tools. We saw a very impressive production line in the recently extended factory and it was interesting to note that every Hilti tool is assembled by one person from start to finish. This clearly works as their testing failure rate for the last year was less than one per cent of all the tools manufactured.

This is the same ‘one-stop’ thinking as we have utilised at SMD where projects are carried out by one team in their entirety, which improves efficiency, consistency and communications through increased collaboration. Our processes are more streamlined with a single self-managed team rather than different departments dealing with clients.”

This trip was a fantastic insight into the future of tooling technologies and how the interaction with BIM modelling, traceability and quality documentation – linked with cloud-based technology – will become more and more at the forefront of our site installations.

It was a real honour to be given the opportunity to see some of Hilti’s great innovations and we look forward to a continued close relationship with the company and to both utilise and participate in the development of its products.

Hilti makes and designs leading-edge technology, software and services, which power the professional construction industry. The company is based in over 120 countries with more than 23,000 employees.

Its technologies support awe-inspiring feats of engineering around the world – from the famous bullet train in Japan to metro tunnels deep under the largest cities on Earth.

Hilti was founded in 1941 as a family-owned company – and it still is. The Martin Hilti Family Trust holds all shares and participation certificates of the Hilti Corporation.

The group is headquartered in Schaan, Liechtenstein, but its reach extends worldwide.

Hilti says it is far more than a manufacturer of tools and equipment and that no other company offers as much in the way of service, education, training, technical data and support.

More than two-thirds of Hilti team members work directly with customers on a daily basis – about 200,000 customer contacts day in and day out. Those real-world interactions inspire the company to develop better tools, better systems—and better solutions.